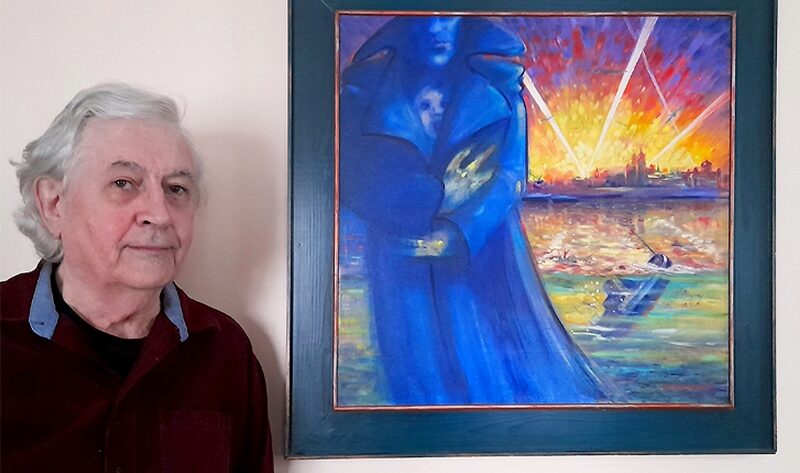 On this edition two stories of rescue from the sea. The photograph at the top is of Patrick Murphy, an artist living in Wales, who drew the picture alongside him recalling how, as a child, he was rescued from a sinking Irish ferry after it hit a German mine when leaving Liverpool during World War Two. It shows a child carried under the greatcoat of the man who rescued him.

For 80 years Patrick has tried to find his rescuer, but has not been successful. He tells how the Maritime Museum of Ireland helped him honour the unknown rescuer. It is a powerful story that will create its own memories for the listener… The second story is that of an Irish sailor, thousands of miles from shore, all alone, in a badly damaged yacht, how he survived, then went to the rescue of another badly injured racing competitor, but had to decide whether to take the offer of rescue himself and abandon his own boat.

And there are two offers on the programme – an encouragement to take up the biggest outdoor maritime sport in Ireland and the programme’s new Maritime Book for listeners’ opinions. Welcome aboard to MARITIME IRELAND.

Episode 28 – Looking after former members of the Defence Forces

The Organisation of National Ex-Servicemen and Women tells us what they’re doing for former members of the Defence Forces who may have fallen on hard times. We hear from a lifeboatman, returned from America about what it’s like to be on call...

On this edition – the 46-year-old barge which is changing Irish marine technology and how small sector fishermen feel about the difficulties they are facing. Also, the latest news from the Irish Whale and Dolphin Group and Water Safety Ireland...

Episode 26 – Saltwater in the Blood

On this edition – A woman’s lifetime association with the sea. Dr.Easkey Britton, surfer, scientist, explorer – and more – discussses her life-long relationship with the sea and explains her belief in “the power of the...

JOHN O’MAHONY, CHAIRMAN OF THE IRISH COAST GUARD VOLUNTEERS REPRESENTATIVE ASSOCIATION On this edition of the MARITIME IRELAND RADIO SHOW, bringing you incisive and comprehensive coverage of maritime affairs in Ireland, there is an extensive...

On this edition, a link-up with the “Fisher’s Voice” video production company in the fishing village of Kilmore Quay, County Wexford, which has produced a documentary ‘”Exploiting Irish Fishermen.” From coastal communities all around Ireland and...

There are about 30 million shipping containers and 6,000 container ships around the world, but what about their safety and security. The programme reveals that UCC Cork and a Kerry company are devising a ‘smart’ container which can be tracked around...