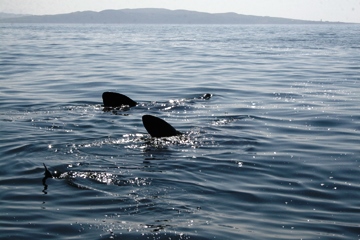 On this edition … The Irish fishing industry says it is being bled to death by the European Commission and lack of Government support… And it demands that it be shown the evidence on which the Commisison has declared lack of trust in the industry.

The programme hears about the ‘Liadhán chor gréine’ the ‘Great Fish of the Sun’ and why it shpu;d be protected; discusses the problems of lack of housing on the offshore islands and how that is affecting island populations and the programme has 50 suggestions on how to create special moments by the sea.

Episode 28 – Looking after former members of the Defence Forces

The Organisation of National Ex-Servicemen and Women tells us what they’re doing for former members of the Defence Forces who may have fallen on hard times. We hear from a lifeboatman, returned from America about what it’s like to be on call...

On this edition – the 46-year-old barge which is changing Irish marine technology and how small sector fishermen feel about the difficulties they are facing. Also, the latest news from the Irish Whale and Dolphin Group and Water Safety Ireland...

Episode 26 – Saltwater in the Blood

On this edition – A woman’s lifetime association with the sea. Dr.Easkey Britton, surfer, scientist, explorer – and more – discussses her life-long relationship with the sea and explains her belief in “the power of the...

JOHN O’MAHONY, CHAIRMAN OF THE IRISH COAST GUARD VOLUNTEERS REPRESENTATIVE ASSOCIATION On this edition of the MARITIME IRELAND RADIO SHOW, bringing you incisive and comprehensive coverage of maritime affairs in Ireland, there is an extensive...

On this edition, a link-up with the “Fisher’s Voice” video production company in the fishing village of Kilmore Quay, County Wexford, which has produced a documentary ‘”Exploiting Irish Fishermen.” From coastal communities all around Ireland and...

There are about 30 million shipping containers and 6,000 container ships around the world, but what about their safety and security. The programme reveals that UCC Cork and a Kerry company are devising a ‘smart’ container which can be tracked around...